A recent study from Arthur Beaudet’s lab at Baylor College of Medicine published in the American Journal of Human Genetics (AJHG) looks at the ability to detect fetal aneuploidies and copy number variants (CNVs) at 1Mb resolution from single circulating trophoblast (SCT) cells in maternal blood. This method uses positive selection via magnetic activated cell sorting (MACS) to isolate these rare circulating trophoblast cells and then performs single-cell low-coverage whole-genome sequencing using NxClinical software to detect aberrations. The team performed two SCT validation studies looking at genome-wide CNVs. The MSR algorithm in NxClinical software uses a pooled reference from a set of normal samples (here, a male and a female reference was created from 3-cell pool of normal male/female trophoblasts, respectively) and uses both on and off-target reads to estimate copy number across the genome. 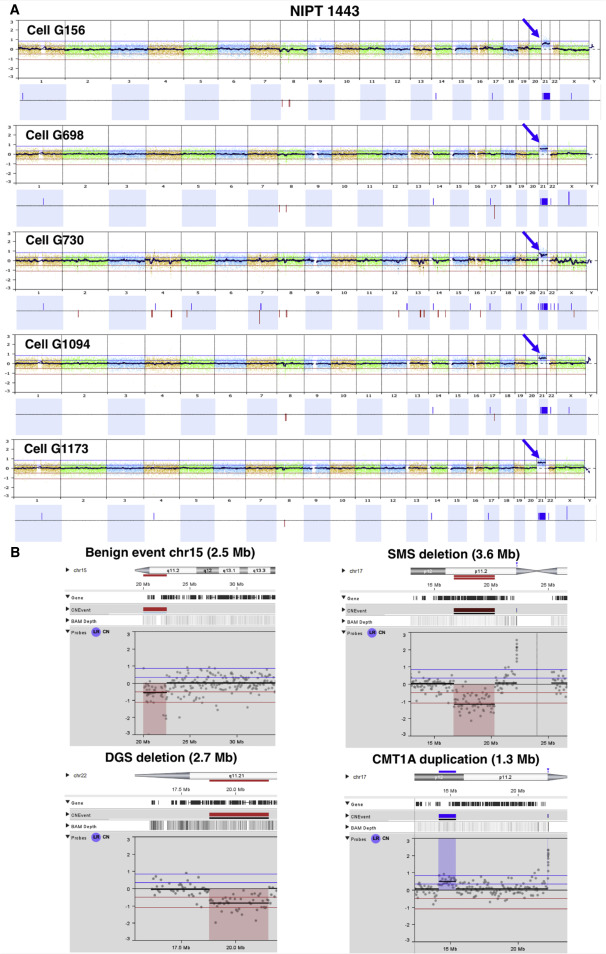 Figure 4, "Examples of Aneuploidy and Subchromosomal CNV Detection" from the paper (https://doi.org/10.1016/j.ajhg.2019.11.004) showing gains on chr 21 (trisomy 21) via the CNV pseudo-probes profile via the MSR algorithm in NxClinical software at the top.  The bottom figues show zoomed in views of deletions and duplications as called by the MSR algorithm.

Each sample in the two studies was scored independently for aneuploidy and CNVs by two ABMGG certified lab directors. Scores between the two reviewers were 89% concordant for aneuploidy pass/fail status and 100% concordant for every passing cell scored as normal, aneuploidy, or pathogenic. After analysis and interpretation, CVS and amniocentesis results for the samples were reviewed and SCT results were 100% concordant with the clinical data when there was at least one high quality trophoblast available.

The results are promising but the authors admit that additional improvements need to be made. The studies showed that it is possible to obtain multiple trophoblasts scorable for aneuploidy and CNVs in more than 50% of all pregnancies tested. Results from analysis of multiple cells from the same pregnancy were quite consistent unless there was evidence of placental mosaicism or multiple pregnancy. One of the limitations of the test includes recovery of a low number of high-quality cells for multiple pregnancy

Availability of an SCT test would be quite welcomed as in current fetal cell-free DNA (cfDNA) based tests, the fetal fraction makes up only 5-20% of cfDNA whereas the SCT is pure fetal DNA. cfNIPT is also hindered by several factors such as maternal mosaicism, and maternal CNVs that affect the data and therefore can only be used as a screening test whereas SCT has good potential to become a diagnostic test with improvements in the number of trophoblasts harvested. The SCT test also has the potential to be diagnostic whereas current cfNIPT tests are only screening tests. The authors are confident that with several additional improvements such a diagnostic test can be a reality in the near future.